Social At The Super Bowl

Social At The Super Bowl

In case you didn’t notice, the San Francisco 49ers and the Kansas City Chiefs came head to head this weekend. It was a red and gold week at SiarzaSD and a no-“Mahomies”-zone in the office. However, it was the lead up to game day and the trending topics across social media before, during and after the game that really got our attention.

Our team picked the best trending moments of Super Bowl LIV (even Kristelle took a break from cheering on her beloved 49er’s) Check out some of the highlights of the big game across social media and why marketers should pay attention!

KRISTELLE:
“Take It To The House, Kid” – NEXT 100 by the National Football League

I’ve fallen in love with the sport again this year, thanks to a fantastic season by the San Francisco 49ers. Besides the heartbreaking loss of my team, I’ve been enjoying all of the content produced by the NFL reminding the fans about 100 years of football. The NEXT 100 commercial that merged with the opening pre-game ritual left the world saying, “Take it to the house, kid.”

Last year’s commercial received an honorable mention from us, but this year’s kick return that took 100 years in the making was actually a logistical masterpiece with careful coordination. I can’t imagine how much work was involved with the Miami host committee,the NFL and FOX Network. The search for the kids started digitally, and after the commercial social media responded with favorable commentary. Many on social media said, “When he stopped at Pat Tillman, I cried.”

Here’s to the next 100 years of football.

DONYELLE:
Oh baby, what did Planter’s do… #BabyNut

Planter’s paused their ads after the tragic death of Kobe Bryant, his daughter and seven others in a helicopter crash just a week before Sunday’s game. The initial ad showed their mascot Mr. Peanut dying in a car accident to save his friends. The company planned to continue to hype up the news of the loss leading up to Super Bowl. It was a smart move on behalf of the company so as not to seem insensitive to the loss of the sports legend but with ad space previously purchased many wondered how they’d move forward during Sunday’s big game. Sunday’s reveal of the reincarnation of Mr. Peanut into “Baby Nut” left some thinking they should have cut the entire thing all together. While we can all agree the timing for their campaign was bad, Planter’s is now facing criticism for their ad, being accused for riffing of the popularity of Baby Yoda and questionable naming of their new mascot. 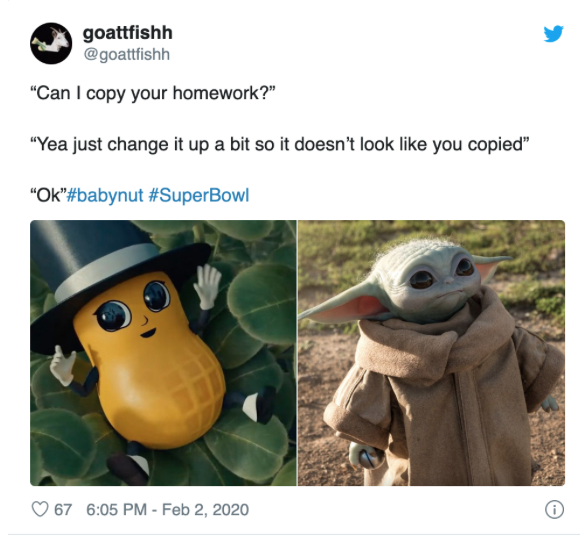 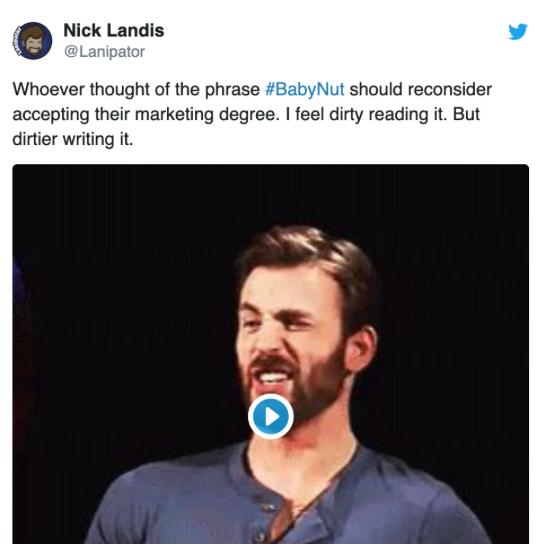 From the sleek design, overall classic brand presence and of course all the zoom zoom feels, the new Porsche ad stood out from the rest. But, our designer and resident car connoisseur pointed out some key tactics Porsche used in their campaign.

Porsche debuted their fully electric vehicle line this year and capitalized on the classic and vintage brand loyalty to gain market share. However, when you compare the Tesla Model S, the Porsche model is far behind. We’ll just have to wait and see the effectiveness of brand loyalty versus performance to know if the campaign was successful.

JULIA:
Hey Google, add tissues to the list because your commercial made me cry.

We all know Google assistants are great for remembering your tasks for the week or that grocery list you always seem to forget. But, their ad this year really reminded us of the important things in life to remember. This opens the door for even better memory care in the future and being able to hold onto the memories that matter most.
Not only did the commercial highlight the features of a Google home device, but it also showed how easily the technology can be used by anyone at any age. I remember showing my grandparents how to use their emails, so something as simple as voice commands would have made keeping in touch with them so much easier.

Bud Light created two commercials featuring the popular rapper/singer Post Malone, who is a loyal Bud Light drinker, for this year’s Super Bowl to promote their newly launched Bud Light Seltzer. They released the ads early on social media so fans could ultimately choose which commercial would air during the Super Bowl. #PostyStore won by just .4%. The well known brand wanted to make it clear to fans that you don’t have to choose between their two products, Bud Light and Bud Light Seltzer, you can have both.

Not only is Bud Light dipping their toes into the hard seltzer water they had a trendy celebrity introduce it. The ad itself is hilarious, which is a huge appeal to consumers, and showcases the inner struggle of trying to decide over two items we want. I just wish in real life I was also “incredibly rich” and get both!

SANTE:
Tom Brady. Somehow he still managed to show up at the Super Bowl.

Full disclaimer, I am the furthest thing from a Tom Brady fan. I’m among the great majority of you who were happy to see a Super Bowl not headlining the “greatest Quarterback of all time”. I’m also a sucker for good strategic marketing and Hulu brought out the big guns this year.

There’s an art in understanding how to appeal to your audience. Not only in translating the right message, but doing it at the right time. When you think about it Tom Brady is like the Kardashians. You don’t really want to know what they’re up to, but somehow you end up knowing their skin care routine. You may not care about his career, but the topic of it still entices you. The initial shock probably attracted more eyes to the screen than any other commercial because of this, but in the end you remember Hulu because they faked you. I’m probably never going to forgive Hulu for crushing my dreams of a Tom Brady-less NFL, but I’ll definitely be binge watching Brooklyn Nine-nine tonight.

Humor does well in advertising. There’s a mental process behind understanding humor, which means we’re actually expending mental energy on an ad. Coupled with celebrity endorsement and the internal opinions we all have of Chris Evans, John Krasinski, and Rachel Dratch, Hyundai’s #BettahDrivesUs ad was brilliant. (Also, props to them for changing their tag line to fit with the ad’s voice. ROFL.)

In many people’s minds, Hyundai has subtly–yet entirely intentionally–positioned itself as friendly, funny, and innovative. Why innovative? Were you not absolutely wow’d by a
self-parking car? I’m trading my lame, manually-parked car in tomorrow.

#InspireChange
The Inspire Change commercial featuring Anquan Boldin held a powerful message and a hashtag that can transcend among a variety of efforts to provoke change.

#MakeSpaceForWomen
Olay’s commercial brought together several powerful women in entertainment, broadcasting and public figures to show the impact of women in STEM. Every tweet using this hashtag Olay donated one dollar to Girls Who Code programs across the country. It’s a hashtag with a positive impact!

#LoveTakesAction
The New York Life commercial used a powerful emotional appeal of defining love to get people to start thinking about their loved ones.

#5GThatWorks
T-Mobile started out Super Bowl LIV rocky with software issues from being overloaded after announcing their phone giveaway. The #5GThatWorks started to trend more positively after seeing Anthony Anderson’s mom at the club with a reliable connection.

#BabyNut
We’ve already told you our thoughts on the timing of the Planter’s campaign, but we can’t ignore the trending moment on social media that continues with #babynut. Take it how you will, but whoever thought that hashtag was a great idea should not be proud of that innuendo.

#SnailJellyfish
Jimmy Fallon has a special way of getting people’s attention using his unique hashtags and he did not disappoint in his first Super Bowl commercial.